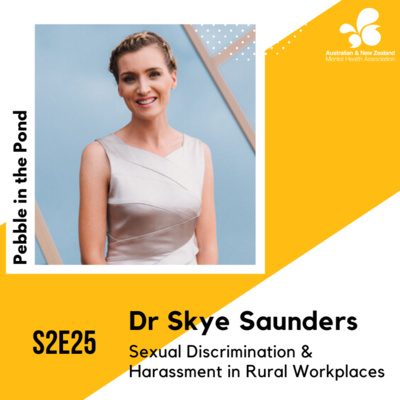 Skye is an Associate Professor in Law at the University of New England, an Employment-Discrimination Solicitor and is the Vice President of the YWCA Canberra. Skye pioneered the first research in Australia on sexual harassment in rural workplaces, contained in her book 'Whispers from the Bush- The Workplace Sexual Harassment of Australian Rural Women.'

In 2017 the Victorian Women's Trust produced a short documentary film called 'Grace Under Fire', which is based on Skye's research on workplace sexual harassment in rural Australia. In her work, Skye strives to ignite the inherent empathy and perception in both men and women as a central part of her mission to disrupt sex discrimination in the workplace.

Skye was a delegate to the United Nations Commission on the Status of Women in New York with the YWCA Australia, and was also awarded the Chancellor's Distinguished Young Alumni Award at the University of Canberra.

Listen in this week as I chat with Skye about her pioneering research into gender dynamics and sexual harassment in rural workplaces, and her framework for change.

Mental Health Benefits of Going Green: Why It Feels So Good