S2:E41 | Vanessa Fowler: From Apathy to Empathy – Being an Active Bystander 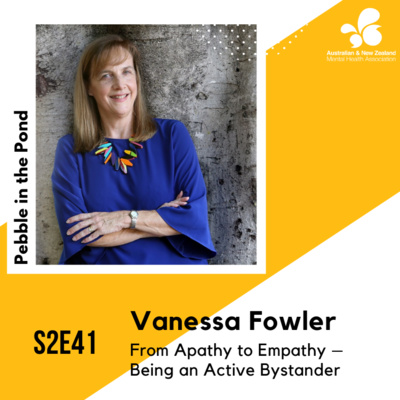 In the world of violence prevention, strategies focused on bystander intervention have received growing attention. One woman committed to being an active bystander is this week's podcast guest, Vanessa Fowler.

Vanessa was a keynote speaker at our annual STOP Domestic Violence Conference a few weeks ago, and the sister of the late Allison Baden-Clay. She is also a wife, mother of two boys and aunt to three beautiful young girls who have tragically lost their mother. Vanessa is a primary school teacher and enjoys educating and shaping young minds.

As many of you listeners will be aware, Vanessa and her family were thrust into public attention following the death of Allison, who was murdered at the hands of her husband on 19th April 2012.

Vanessa and her parents turned their anger and sadness into something positive by starting a conversation around family and domestic violence. She has been a guiding force in the formation of the Allison Baden-Clay Foundation, taking on the role of a Director and Chairman of the Board.

Vanessa is on a journey to educate the community around the signs of domestic violence and teach tactics to become an active and effective bystander. As an educator, it is important to Vanessa to address the underlying attitudes and cultural beliefs that perpetuate gender inequality and socialisation that leads to violence against women and children.

The Psychological Impacts of Heart Conditions

Keeping On Track With Health Goals Amidst The Pandemic